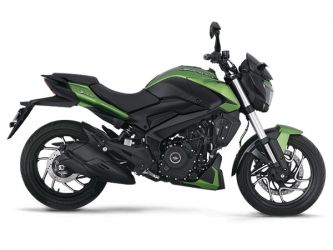 The 2019 Bajaj Dominar builds on the design and styling of the previous model. It at first looks like the same design, but it does in-fact have lots of updates even in terms of styling. Up-front is the same LED headlamp seen on the previous model. The mirror stalks are brand new and features a unique design that will stand out in a crowd.

The bigger difference comes in the form of the upside-down forks up front. The 43mm USD forks with an aluminum finish plays a big role in the styling of the motorcycle. From the side profile, the 2019 Bajaj Dominar still comes with the muscular tank cowl and rear cowl.

However, this model comes with new colours and we must admit, the Aurora green colour is very attractive. If that is not to your taste, you always have the Vine Black colour. The motorcycle is currently available with just two colour options.

The 2019 Bajaj Dominar is powered by the same liquid-cooled, 373cc, single-cylinder engine as the previous model. However, there are quite a few differences. The engine head has seen a lot of changes as it has gone the DOHC (Double Overhead Camshaft) way.

Bajaj has upgraded the ECU and added a new exhaust system. All these changes have worked together to make the 2019 Bajaj BS-VI emissions compliant. The engine in the 2019 Bajaj Dominar produces a maximum power output of 39bhp at 8,000rpm and a peak torque output of 35Nm at 7,000rpm.

The rear wheel is driven by a 6-speed gearbox assisted by a slipper clutch. 0-100km/h is done is just over seven seconds and the motorcycle is capable of touching a top speed of over 170km/h.

Performance is brisk, however, the 2019 Bajaj Dominar impresses the most with its cruising capabilities. It can stay at triple digit speeds all day long, and it will cruise at 120km/h without breaking a sweat. The Bajaj Dominar wasn’t designed to be a fuel-efficient motorcycle. It is a performance motorcycle and hence good fuel efficiency figures cannot be expected from it. The Bajaj Dominar returns a mileage of around 27km/l in real world conditions. The 2019 Bajaj Dominar is packed with features. It comes with two displays for instrumentation — one is placed conventionally while the other one is placed on the tank, ahead of the fuel filler cap. The conventionally-placed screen displays the engine speed, vehicle speed, real-time fuel efficiency, etc. The one on the tank displays the gear indicator, odometer and trip meters.

The Bajaj Dominar has since the start been a value-for-money motorcycle. This value-for-money factor has only increased by leaps and bounds with the new 2019 model. The addition of USD suspension up front, a DOHC engine head and increased power output has certainly added value to the motorcycle. The 2019 Bajaj Dominar is a motorcycle that can do almost everything well. It is robust, can munch miles, do high-speed runs and can even handle your daily commute.

Is the new Bajaj Dominar better than the old model?

The 2019 Bajaj Dominar comes with several new features that make it better than the older model. It comes with USD suspension up front, a DOHC engine head, new instrument clusters, a new exhaust system, more power and a smoother engine.

Hide Answerkeyboard_arrow_down
How much mileage does the 2019 Bajaj Dominar give?

The 2019 Bajaj Dominar returns a mileage of 27km/l in real world conditions.

Hide Answerkeyboard_arrow_down
How does the new Bajaj Dominar perform on long distances?

The 2019 Bajaj Dominar comes with more power and a smoother engine. As a result of this, it is easier on longer distances.