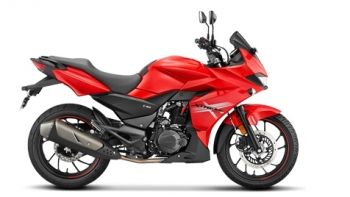 Upfront, the Xtreme 200S comes with a rather retro-Japanese superbikes look. It features a trapezoidal headlamp cluster, consisting of two triangular LED lights on either side of the main headlamp unit at the centre.

The side profile of the Xtreme 200S has a clean design. It does come with sharp lines. However, they have been well integrated with the overall design of the motorcycle. The fairing also comes with a single ‘Xtreme 200S’ stickering, maintaining the clean and minimalistic look. At the rear, the 200S features the same tail section as on the 200R, along with LED tail lights and a split grab rails. The Xtreme 200S comes with single-seat piece, with neutral handlebars and footpegs. This allows the rider to have an upright position, making it easy to ride for long distances. The engine on the Xtreme 200S continues to be smooth, refined and offer a linear power delivery. The engine vibrations are also low, even when the rev-meter nears the red line. The gearbox is smooth as well while offering smooth gear shifts.

The Hero Xtreme 200S comes with a single-piece seat, with an upright riding position. The footpegs and the handlebars are also set in a neutral position offering easy commute even during long rides. The suspension is similar to its naked street-fighter version while the braking is also good with a decent amount of bite from the disc set-up. The Hero Xtreme 200S is a premium commuter motorcycle. While the official mileage figures of the Xtreme 200S is yet to be confirmed by the brand, we can expect it to return a fuel efficiency figure of roughly 35 - 40km/l. The Hero Xtreme 200S rides on 17-inch alloy wheels wrapped in tubeless tyres. The suspension on the motorcycles is through standard telescopic forks up front and a 7-way adjustable monoshock at the rear. Braking is handled by 276mm and 220mm discs at the front and rear, respectively, supported by a single-channel ABS as standard. The Hero Xtreme 200S is a value-for-money premium commuter motorcycle offering. It offers the ease of a commuter while having the design of a sportsbike. The Xtreme 200S offers a clean design, along with good performance and even better mileage and ride comfort. Hero has definitely struck the right note with the Xtreme 200S.