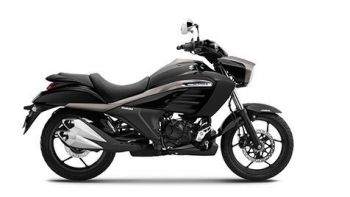 The Suzuki Intruder is a cruiser motorcycle in the 150cc segment. The overall design of the motorcycle is similar to the bigger Intruder M1800R with bulky front bodywork. The signature headlamp, muscular tank with massive shrouds and the tail section similar to the Hayabusa makes the Intrude a premium offering.

The front end of the motorcycle features triangular-shape headlamp with LED DRL and a crown which holds the instrument cluster. The Intruder badging on the tank adds to the premium touch. The Intruder also gets engine cowl and stylish twin-port exhaust which gives it a big bike feel.

The Suzuki Intruder is powered by a 154.9cc air-cooled, single-cylinder engine with a maximum power output of 14.6bhp at 8,000rpm and a peak torque output of 14Nm at 6,000rpm. The engine is coupled to a 5-speed gearbox.

The Intruder employs the same engine used in the Gixxer series, but it is tuned differently to suit the cruiser motorcycle. The engine features a larger airbox and delivers better low-end torque for daily commuting. The engine is refined and free-revving which translates to a smooth ride. The rear sprocket is slightly bigger which aids in better low-end performance. The Suzuki Intruder is loaded with features such as triangular-shape headlamp with LED position lamp, smart digital instrument cluster and premium Intruder emblem on the tank. The motorcycle also features ABS on the front wheel. The rear profile of the Intruder gets chunky rear cowl with LED tail lamp.

The suspension duties on the Intruder are handled by telescopic forks up front and monoshock suspension at the rear. The motorcycle is equipped with disc brakes at both the ends with single-channel ABS on the front wheel. The motorcycle gets an 11-litre fuel tank. The Suzuki Intruder is a premium offering in the 150cc cruiser motorcycle segment in India. The overall design is bulky which is an overkill due to its engine capacity. The other downside of the motorcycle is the tyre size as Suzuki could have provided chunky tyres to suit the overall design. But overall it is a good package, and ABS makes it even better for those who are looking for an entry-level cruiser.