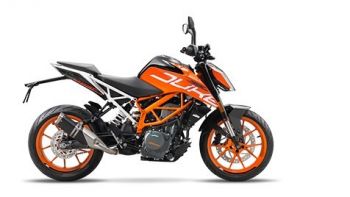 The KTM 390 Duke is a performance naked motorcycle in the above 350cc segment. The overall design of the motorcycle is aggressive and sharp as it is based on its elder sibling, the 1290 Super Duke R. The front profile of the motorcycle features a split LED headlamp which renders the 390 Duke a sporty look.

The fuel tank is muscular and the extending shrouds enhance the sporty appeal of the 390 Duke. The exposed split trellis frame reflects the raw performance of the motorcycle. The motorcycle also gets a new side-mounted exhaust cannister which blends well with the overall styling.

The all-new tail section of the KTM 390 Duke is sharp and edgy with the new LED tail light, split grab rails and the tail-tidy design. The new 390 Duke decals are neatly laid out and the orange colour on the fuel tank, trellis frame and alloy wheels add to the looks of the motorcycle. The power-packed 373cc engine is the main highlight of the 390 Duke. The engine is refined and delivers an instant burst of power as soon as you twist the throttle.

The vibrations are well contained throughout the rev range. The motorcycle can easily reach triple-digit speeds in no time thanks to the short gear ratios.

The KTM 390 Duke is a fun-to-ride motorcycle and the tubular trellis frame aids in superior handling. The performance of this motorcycle is the main reason for its success in India.

Fuel efficiency is not the forte of KTM 390 Duke. With the high compression 373cc engine tuned for outright performance, the motorcycle returns an average mileage of around 23kpl. The KTM 390 Duke is a feature loaded motorcycle. Up front, the motorcycle gets sharply designed split LED headlamp with boomerang-shaped LED DRLs. Another prominent highlight of the 390 Duke is the TFT display which also doubles up as the instrument cluster. The display can be operated via buttons on the left side of the handlebar. The display can be synced to the user's smartphone via KTM MY RIDE app.

The motorcycle also features ride-by-wire throttle and slipper clutch for smooth downshifts. The split tubular trellis frame aids in superior handling. The seats are wide and comfortable for long rides. The suspension duties are handled by upside down WP forks at the front and WP monoshock suspension at the rear. The suspension setup is stiff for spirited riding. The KTM 390 Duke is one of the best motorcycles in the above 350cc segment. With its brute performance and aggressive styling, it is an excellent package for its price tag. The only issues with the motorcycle are the poor NVH levels and heating. But it should not be a deal breaker as it gets premier cycle parts and the build quality is top-notch. Overall it is a very good motorcycle for those who are looking for an affordable high-performance motorcycle.